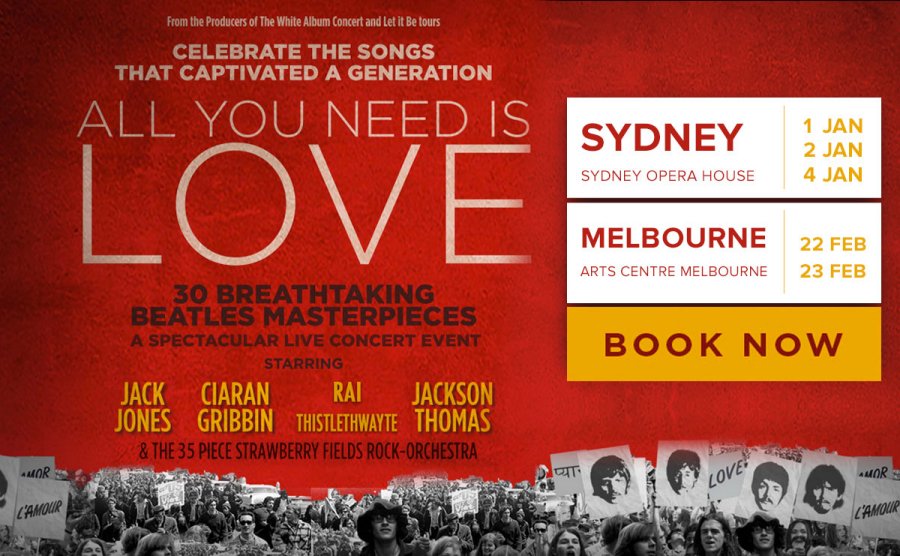 There is simply no more revered band than the Beatles. In a mere 10 years between 1960 and 1970 they turned rock and pop music on its head, never to be the same. And while the legacy of the band includes all number of social affects it is the breathtaking weight of its musical output that will always be timeless.

The 'All You Need is Love' crew have been extravagantly celebrating this catalogue for some years now, by combining four of Australia's best known voices with the Strawberry Fields rock-orchestra. The new year concerts in Sydney have become a regular fixture over the last few years and I found myself settled in for the final show of the 2019 run in a packed concert hall.

To cut to the chase, the concert was sublime - tackling the material with respect, verve and sheer joy.

Wisely, the two sets drew mainly on post 1966 albums, making the most of the orchestra. By this point The Beatles had all but stopped functioning as a live band and were focusing their creative might in the studio alone, resulting in the transcendent albums we know and love like Sgt Peppers, The White Album, Revolver etc.

The Strawberry Fields Orchestra comprised of the Sydney Lyric Orchestra (some of it's members pulled double duty with the concurrently running Led Zeppelin Masters shows) with a crack rock ensemble. Adrian Keating served as orchestra leader and Rex Goh as music director for the rock band. The inimitable Dominic Harvey conducted with his usual flair and stole the limelight at regular intervals.

Instrumentalists were applauded for nailing solos that have been etched into aural memory - such as the 'Penny Lane' pocket trumpet fanfare, the frenetic sax solo in 'Lady Madonna' and Ringo's 'The End' drum solo.

It's hard for me to pinpoint standout moments given I love the band so much, but the two orchestral climaxes in 'A Day in the Life' were jaw dropping, 'Got To Get You Into My Life', 'Hey Jude' and 'Hello' were euphoric and 'Yesterday', 'Something' and 'The Long and Winding Road' achingly melancholy. Hearing these pieces in a live setting was pretty special, particularly remembering that The Beatles were never afforded this luxury in their time.

The capacity crowd loved every minute, often singing along and were all too eager to present a standing ovation at the close.

All You Need Is Love moves to Melbourne in late February - get on it!

This review is written with thanks to Chris Maric of Maric Media.

Ok, so this is The Guitar Speak Podcast so the guitar fun was duly noted.

Burton and Goh absolutely nailed the parts and tones juggling multiple instruments throughout the show. Both guitarists were running Axe - FX III rigs feeding FOH and each used a silver panel Fender Twin for stage monitoring.

Burton stuck with Les Paul styled guitar for all of his electric parts, with a cream Strat on standby. He strapped on a Maton acoustic at various points and reserved a Gibson J160 (with Beatles approved face mounted knobs) for 'Yesterday'. I assume this guitar was tuned up a tone to accommodate the original key of the song.

Goh also sported a pair of Maton/Gibson acoustics. For electric duties he played a beautiful Epiphone Casino and Gibson SG. Goh employed a Jerry Jones sitar guitar with great effect on 'Strawberry Fields' and 'Norwegian Wood' and pulled out a ukulele for a fun version of 'Honey Pie'.

Mitchell played a four string Music Man Sting Ray throughout the show, whilst a Hofner Beatle bass remained unused, despite the coaxing of guitar techs early in the show and in the interval. Mitchell beautifully drew McCartney's melodic bass lines out of the Music Man all night. In particular, his reading of 'Something' was fantastic.

Jones used his Charles Cilia Strat style guitar on 'She's So Heavy' through a Fractal Axe 8 floorboard. Jones is a recent digital convert but all of his signature tone was on hand.